Advanced Radiation Therapy and Your Options 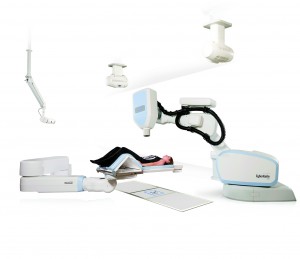 What Is Advanced Radiation Therapy?

When exploring different forms of therapy, stereotactic radiation is generally the most advanced. Though there are several different options, patients should be aware that the best treatment for them is highly dependent upon individual circumstances and should be evaluated with their oncologist on a case-by-case basis. These treatments can also be used in combination with other treatments, such as chemotherapy and surgery.

On a basic level, cancerous cells in the body grow and reproduce at an uncontrolled and often dangerous rate. Because the cells’ growth is abnormally rapid, irregular growth can spread to other parts of the body and destroy normal organ function. To counter the dangers of these cells, radiation therapy is designed to deliver radioactive particles to the cancerous cells in order to damage them, and slow and/or prevent further growth of the tumors.

As its name suggests, Stereotactic Body Radiation Therapy is designed to treat localized tumors within the body. Because this treatment is used on tumors of a localized nature, SBRT involves a small number of highly precise radiation treatments. Due the high dosage delivered within each treatment, this type of therapy is typically performed in a shorter time frame than conventional radiation therapy. Common organs that are treated with SBRT are the liver, lungs, spine, and pancreas.

Very similar to SBRT, Stereotactic Ablative Radiotherapy is a series of precise, high-dose deliveries of radiation to a tumor in the body. However, SABR treatment can also be used for different parts of the body such as bones or even the brain. Whereas SBRT is often performed on a daily basis, SABR treatment is typically executed every other day depending on the tumor size and location. Additionally, this kind of radiation treatment is most effective in areas where the primary tumor’s progression is slow and the other remote areas are generally localized and few in number.

Stereotactic Radiosurgery is a non-surgical approach that is primarily used to treat irregular brain functions, such as small tumors. Like the other stereotactic treatments mentioned, this type of radiation involves a smaller number of high-dose treatments that are precisely targeted at the cancerous area. This approach is particularly effective when treating brain tumors because its limited number of deliveries helps preserve surrounding healthy tissues.

How CyberKnife Can Help

Of all FDA-approved radiation equipment, CyberKnife is the only proven system able to deliver all three types of radiation treatment: SBRT, SABR, and SRS. Approved in 2001, CyberKnife combined the best of past technologies to produce the most effective cancer-fighting equipment on the market today. Offering sub-millimeter accuracy and minimizing exposure to healthy tissues, CyberKnife presents a non-invasive treatment option that delivers high doses of radiation to tumorous areas not only in the skull and spinal areas, but all throughout the body.

Contact us to learn more about CyberKnife cancer treatment and one of our Board-Certified Physicians will respond within 24 hours.